Posted on November 7, 2011 by Jennifer Schwartz

Not only do I not know what day it is, I also cannot access 99% of American websites, so forgive me if I repeat myself, because I can’t check what I’ve already written. Meghan has been amazing at holding down the JSG fort while I’m gone, and I send her these updates by email for her to post. I think Meghan deserves an awesome present. So Meghan, what will it be? Strap-on wheels for the heels of your shoes (They’re adjustable! Good for big or small! Light up! No batteries!)? I can so see you cruising around the gallery in those.

I don’t think I have mentioned the weather in Lishui. Someone rightly described the humidity as New Orleans times Atlanta. It has been oppressive and compounded by the lack of interest in adequate air conditioning. The AC in the hotel rooms is a tricky thing, and just when you think you have it figured out (Celcius to Farenheight conversion accounted for, lowering the temp and hitting the “set” button, getting an extra room card so you can keep one in the wall that triggers the electricity to be on. . .), housekeeping turns off the unit, opens the shades to the blazing sun, and opens all of your windows to let in a humid, smoggy mix of freshness.

But in non-weather related news, the work has been hung, the Lishui Photo Festival has begun to much fan-fare, and Wal-Mart has been visited. Twice.

Each photographer was responsible for printing and bringing their work here. Then as soon as we landed in Lishui, photographers and curators were whisked away to the exhibition center to install the show. The volunteers are a large and enthusiastic group of students, and they are incredibly helpful and excited to be here. They went from shyly asking to have their pictures taken with us on the first day of install to having us sign their volunteer jerseys and ask for our phone numbers by opening day. 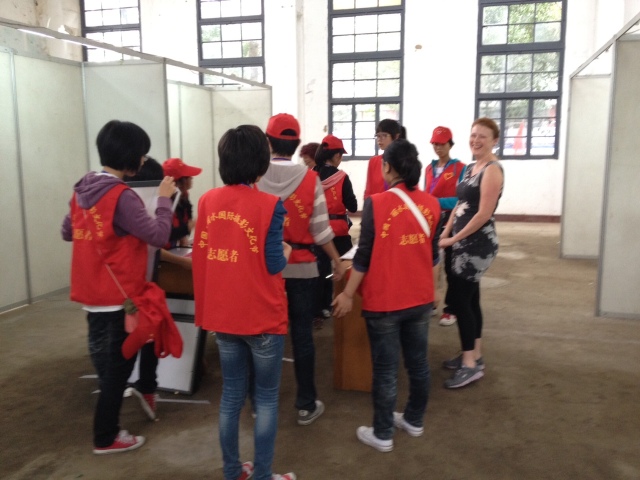 Melanie McWhorter and the volunteers installing her photographer's work.

And by now, we are all used to getting our pictures taken like we are celebrities. The paparazzi moments have been plentiful, intense, and hilarious. The opening ceremony for the festival had us walking down a red carpet, and the second opening ceremony for the festival (yes, this was unclear to us as well) looked like a shoot-off between Chinese and Americans. All of the Chinese were swarming in and taking our pictures, and then we were all taking pictures of them taking our pictures. 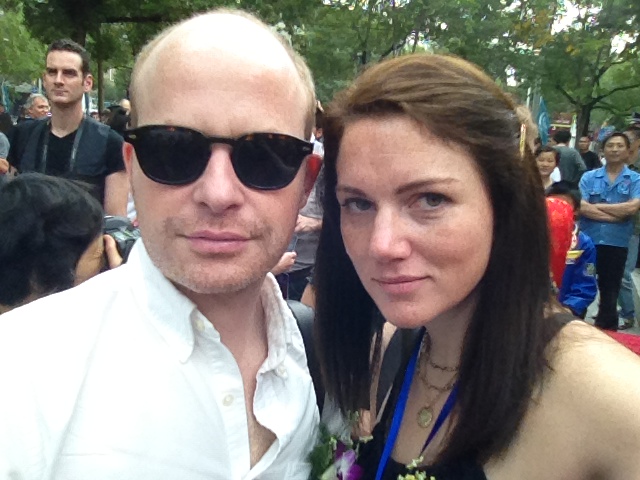 Michael Schmelling and me, representin'.

The first opening ceremony was a nighttime event in a beautiful theater, and it felt a bit like the Oscars with witty (presumably) hosts, award presentations to photographers, and many, many song and dance performances. My iPhone picture doesn’t do it justice, but luckily I’m surrounded by photographers with mac-daddy cameras and a willingness to share post-trip. And if you’re in Lishui, you can watch the ceremony on local tv, where they are broadcasting it in a loop. I may have fallen asleep for a brief moment while the cameras were on me, but it hasn’t been confirmed. . . jet lag. . .sorry, China. 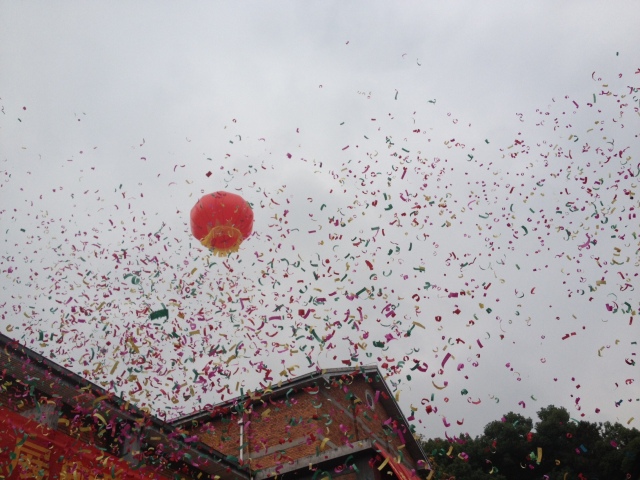 Opening Ceremony performance (you can't tell from this picture, but the male dancers are dressed as bedazzled cowboys).

Wal-mart is a couple of blocks from the hotel, and was described to me by previous Lishui Photo Festival attendees as a “must-see”. In some ways it was exactly the same as our Wal-Mart, and in other ways (selling chicken feet, an incredibly smelly live-food section), it was worlds away. I was thrilled to get some Skippy peanut butter to stash in my room and a Chinese flat iron to combat some humidity + hair issues.

Last night a large group of us decided to skip the free hotel buffet dinner (we eat three meals a day in a revolving restaurant at the top of our hotel – three meals that are exactly the same) and find a restaurant. At the enthusiastic suggestion of our hotel concierge and about 45 minutes later getting directions (it was one turn, less than a block away), we arrive at. . . Pizza Hut. They suggested the large group of American tourists looking for a “really great” restuarant should go to Pizza Hut. It was hilarious.

So right now I wanted to say “goodbye” in Chinese, but I am hopelessly inequipped to handle this language. Maybe next time.

This entry was posted in Uncategorized. Bookmark the permalink.